The rhythmic dip of hand and arm into the soft river water had slowed; the cold was reaching into my tiring muscles. Each kick of my legs – especially my left – against the strengthened current as we made our way steadily upstream was becoming harder. My muscles and tendons were taut, weak, losing power. As brickwork and a railing came into view to my right, I lifted my head to glance at the swimmer next me. From behind her goggles she looked across: “Are you alright, Andrew?”. Rachel and I had met only an hour and a half earlier yet her years of experience could sense that I wasn’t. “I think I’m going to have to stop. I’m cold.”

It was an end of summer swim in the river Avon; the water should be at its kindest but rain for several days earlier had chilled its gentle beauty and strengthened the flow to a level we hadn’t experienced the last few times we swam there. I had felt fit and well-prepared after a wonderful season of swimming, running and cycling and I’d cycled there that morning after breakfast. It was about 20 miles and a ride I’d done plenty of times before, but I hadn’t eaten anything on the way and had been over-eager to get in the water. I’d stripped off my summer cycle kit under the sullen grey sky, into my trunks and yellow swim-cap and was first in the water. The current was immediately obvious as my fellow swimmers climbed and splashed their way noisily in behind me. “Hold on Hiawatha!” Mel called, “wait for us”. Usually she would have no need to say that, as she could easily power past me, but I was keen to get going and wanted to keep the warmth from cycling in my body. Hiawatha. I smiled to myself recalling the time we swam in June and I’d enjoyed the shivers and shakes of cold as I tried my best to warm up afterwards in the sunshine. We danced about; I sang crazily, running around and earned my new nickname.

I slowed and looked around as we reached the first pool and the river became a little lazier. A swan glided by near the bank and a group of about five swimmers, some sensibly wearing wetsuits, opted to stay there. A small posse of four of us picked up the pace saying we would swim down into Stratford. I hadn’t swum with Rachel before and we shared a few words as I matched her pace downstream. She was a strong swimmer and it felt good being alongside. Mel and Rachael were ahead already – they were training for the Dart 10 k swim in a few weeks and obviously wanted to get some real swimming in. It was about a mile downstream and eventually we were swept by the flow under the bridge, waving and laughing at the tourists.

We turned and began to swim back to the bridge. “It’s flowing pretty quickly isn’t it?”. It seemed to take minutes to even get past the parapet of the red sandstone. I was keen to get back already. Pushing hard and beginning to really kick I realised it was going to take some effort. We swam on, stopping occasionally until we were about halfway; my tired, cold muscles were struggling to generate power. I’d done plenty of skins swims over the summer and knew what it felt like to get cold, but this was different. I didn’t have energy; my tendons were beginning to strain in my legs and I let me feet drop down, thankful I was able to touch the river bed. Plunging in again I struggled to get going but eventually managed to catch up with Rachel, which was when she turned towards me.

Reaching up toward the railings in front of me I managed to pull against my feet and lever myself out of the water. Painfully, I half climbed, half fell over the top and found myself in someone’s garden and could hear my friends shouting to me as I ran up and down to keep warm. My ears were struggling to hear what they were saying and a man had appeared and was telling me to “take that silly hat off!” as I ran up and down his neatly manicured lawn to get warm.

Peering back towards the river I realised that a green canoe had appeared and a taxi-ride was being negotiated back upstream for me. I clambered over the fence and gratefully into the boat, shivering profusions of thanks at the man who paddled me back upstream. I didn’t realise that I was being photographed from the opposite bank as I gripped the sides of the canoe and the oarsman heaved against the additional weight in the front of the boat! 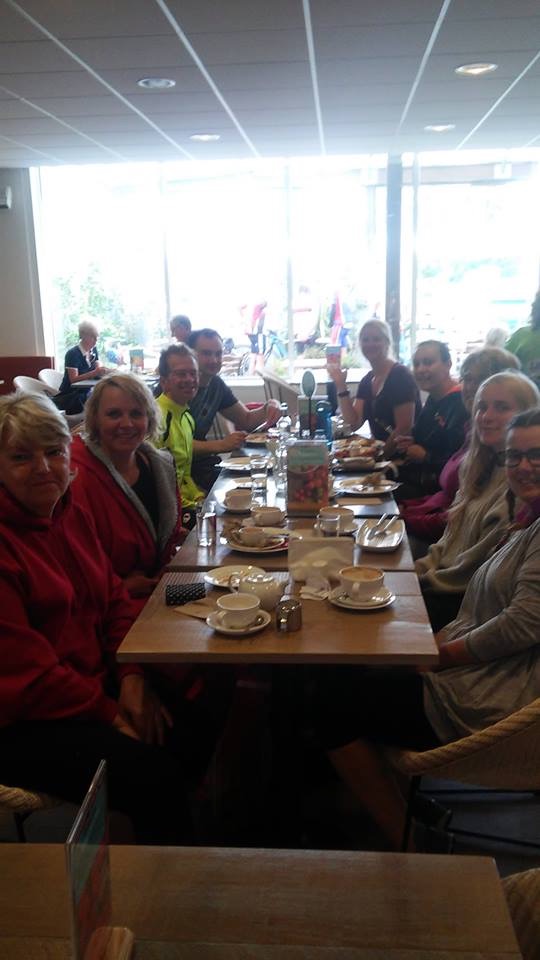 I think we arrived back at about the same time as the other swimmers. I stumbled to the waiting cars, slowed fingers doing their best to get into warm clothes and eat a banana at the same time. “You were hallucinating!” I was shivering that’s for sure. I pulled on longer cycling tights and as many layers as I had with me and was soon back on my bike, riding as fast as I could towards the second breakfast that was waiting for us at the café at the top of the hill.

Acknowledgements – thank you so much to Rachel Parkes for her support and for the great bunch of mates I have. It can’t go without saying that we all learnt a lot from this swim.